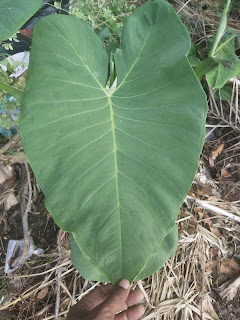 CHARACTERISTICS:
This particular type of "Elephant Ear Plant" aren't cultivated as an ornament rather found growing along roadsides or even swamp areas - there was a period where it was widely cultivated as a food crop around the Southeast Asia region until it fell out of popularity. Somehow these do have it's favoritism in some countries where its tubers were cooked and consumed.
These were found all across the tropical regions from Asia to Americas - firstly cultivated as a crops, now very much as an ornamental plants. They do have an invasive characteristics where these may form a ripen clustered seedpod consumed by birds or few animal as propagation vectors.
There are some versions where the variegated types are also cultivated as an ornamental plants - often sold in the plant market as an exclusive premium plants, however these are truly giants and may show a magnificent  foliage display.
One of the specific variegated type was very popular and was known as Xanthosoma sagittifolium "Mickey Mouse" It used to be very expensive until it was over cultivated and price came crashing down - now, it is easily sold for RM30 per plant - 10X cheaper than what it used to be then.
However, variegated plant versions do prove to be slow growing and can be challenging when it is cultivated - often not so forgiving when the plant dies when it is grown in a wrong plant conditions. I guess those were plant trending moments when it was in highly popular in demand. Now, it is not so much.

APPEARANCE:
It does have some similarities like a Thai Giant in the coloration. The stem and leaves are flush green - unlike the Blue Taro where the petiole is dark in bluish maroon tones - this one is fully light green.

UPDATE:
I had managed to cultivate this growing in a water fountain and was quite amazed to note that the rhizome root ball seemed to grow well and also put out vigorous plant shoots when planted in this condition.
The foliage appears to be very much velvety in the green tones - I didn't cultivate this in long term basis in few of strong overgrowth and unable to handle it later on when it appears to grow very big and strong. Hence, I had gifted this plant to a friend who loves elephant ear plant and it had stabilize in her garden setting. 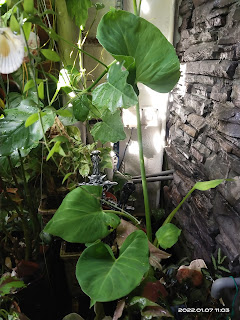 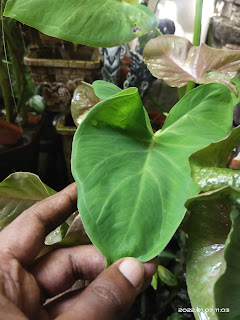