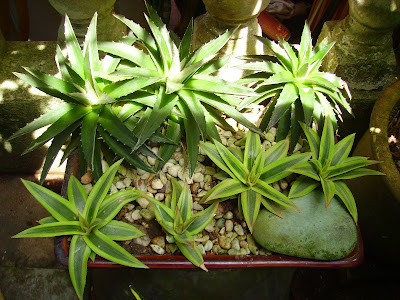 This is an update of my dyckia planted on December. They seemed to remain static for awhile and continued to remain in that manner eversince. I decided to plant more bromeliads to add some colour to them. The dyckias seems to sprout out more leaves and giving that star-like figure, still no new pups emerges anywhere.

Would you believe it that those rosettes are actually from a pineapple fruit. I actually got them from a supermarket on the friut section. It was during the Chinese New Year season, I guess this one was used for prayers rather than consumption. (I guess they are ornamental pineapples?)

There were 4 pups attached to the friut. Its a pity the crown of the pineapple didn't make it but I guess I can comfort myself to see that these 4 survived. I bought the fruit for about RM4.00 which is quite a deal if you consider buying them from a nursery (a small pot of a bromeliad pup might easily cost about RM9-RM12)

I later realised that the colour had somehow changed where the lighter border seemed to be more distinct and brighter and the dark green centre being more vibrant - it really don't look anything like a pineapple now. (or is it?)

These are quite hardy and really require no care at all. So, in a sense - you can count on them for a hardy garden theme factor. The only thing is the appearance factor. Hope no one will think that these are plastic spiky stuff. (somehow, they really do feel like one)