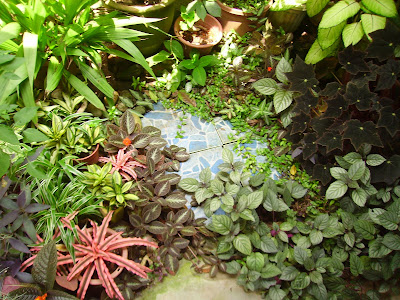 This is very much the "BEFORE" factor.
I'm still in the midst of redesigning this space.
I'm not sure how many would still agree that this is beautiful and would still keep this arrangement in their own gardens undisturbed. Currently if you notice the blue tiles - they are now totally non-visible taken over by the undergrowth.
(current pic. not taken)
So are all the nice looking pebbles and rocks.
Neither the orchids remained.
I had the Mokara orchids (or it could be Reed orchid)
trailed on the fence.
They grew very well and healthy trailing all over and started to spread and I kept them patiently waiting for that few years.
(or so I think - felt it was sooo... that long)
All for the waiting to see them bloom. (but they didn't!!!!) 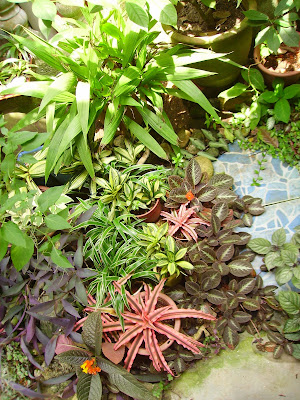 So one fine day - I decided to prune them.
Then eventually I decided to give all of them away.
I kept a few branches (just hoping that they might just bloom someday) and relocated them to a different place.
(outside my house)
Then the place appear to be a little brighter, clearer & fresher.
So went the plants that trailed along the slope
(ferns, zebra tradescantia & a few others)
Pruned and cleared those Bleeding Hearts. (never knew that these vines can just trail to all the nook and corners)
And above all - have enough to give away to friends who still appreciate plants.
Most of the herbs and edible plants are out from my garden.
They had already matured and died and I didn't bother to replant them again.
(One theme - striked out from the list)
Now the most difficult question was what to keep and what to go (in my case - giving it away)
I'm still deciding on the ferns (I still got a few species) whether to blend them together in the garden space or take a cold cut of removing them completely.
Another was the fragrant plants - they don't look attractive with their green leaves & to say their blooming episode takes place during the most unpredictable time.
(I was thinking of converting them into bonsai - especially the orange jasmine and water jasmine)
But others - I'm still scratching my head and totally ran out of ideas. (want not, keep not) 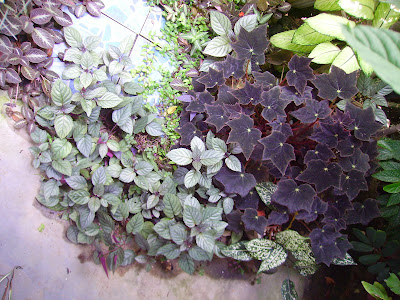 And the factor of theme - I really cannot figure it now as I got everything that I can possibly grow - in a small constraint space (pots and all)
I love the Zen concept - less is more.
(That would mean more is out of my garden)
The Bromeliads section fits well with this idea
(Earthstar, Pineapple, Dykia & Spanish Moss)
Still setting and arranging with this concept with the mix with Purple Queen & Golden Hahnii gives a very good colour contrast (perfect for small space gardening)
The only set back with Tradescantias is that they tend to get leggy and walk out from the designated pots (literally)
I wonder is that's why they are known as Wandering Jew?
The Dumbcane collection were totally neglected. Most of them really need some pruning and replanting. And what I fear most of them are beyond repair. 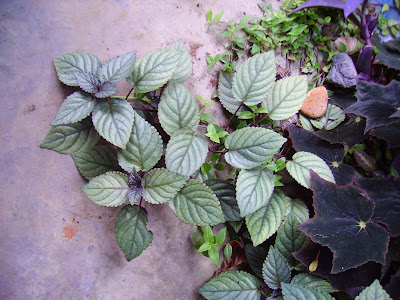 I found that Episcia (Flame Violets) grows very well when they are on ground compared as placing them on hanging containers. And so are the Black Velvet Begonia - this one had stolen the show compared to all the hanging ones put together.
And the Red Flame Ivy (you guess it) - it had crawled out from its resident pot and now all over except on its designated pot.
The best solution I had figured out so far is conquer a little at a time.
And that seemed to be the most productive thought and work that took place over these past few days.
And enough to keep me motivated to expanding that small territory in clearing of what my wife calls the currently calls my garden:
Its a Jungle Out There!
And I had a friend visit my garden who confirmed what my wife said without any second thought. I guess I'm still in the denial concerning the mess that took place during the process.
And it always.. (repeat)
Always rains when I'm in the midst of gardening.
There are mud, dirt, dried leaves and stuff all over.
(And I thought it's suppose to be a very hot season during this time of year)
The garden is infested with snails, ants and mealy bugs.
I'm secretly hoping to clear my garden ASAP as to avoid any new unwanted creatures making itself its home (you know what I mean)
And yeah..
hoping to have a better garden this year compared to all those years put together.
So if I give up or failed in the process -
I would call my next posting: Jungle vs Garden.
(come to think about it - that what actually happened to my mom's garden and my mother in law's garden - Strange!!!)
Posted by James David at 12:45 PM 14 comments: