Here is a collection on succulent & cacti plants:
Some of which are suitable to lowland tropical hot & humid climate and some are cold hardy plants which may be suitable for temperate regions which may also be suitable to highland cold climate as some of which may require cold freezing nights.
Some of these plants were in the trending list and were sold at a high price tag, now they are sold in a very affordable price range, Identifying which plants do best in your garden conditions would be the successful key to ensure you are able to maintain and cultivate these plants in years to come.I will be sharing my point of view and my experiences here in this video.
Posted by James David at 2:06 PM No comments:

Some of these plants were in the trending list and were sold at a high price tag, now they are sold in a very affordable price range, These include some of the Anthuriums flowering species. Identifying which plants do best in your garden conditions would be the successful key to ensure you are able to maintain and cultivate these plants in years to come.I will be sharing my point of view and my experiences here in this video.
Posted by James David at 2:04 PM No comments:

Here is a collection on indoor plants:

Some of these plants were in the trending list and were sold at a high price tag, now they are sold in a very affordable price range, These include some of the philodendron and monstera species.

Identifying which plants do best in your garden conditions would be the successful key to ensure you are able to maintain and cultivate these plants in years to come.I will be sharing my point of view and my experiences here in this video.
Posted by James David at 2:02 PM No comments:

Here in this video, I will be sharing my Tips and Hacks on How I care & cultivate my Black Ripple Colocasia and together with other Alocasia & Colocasia in my Collection.
These types are commonly known as Elephant Ears due to the large leaf structure, though some of them are identified as different class and species names.
I will be covering detailed information on soil medium, watering, lighting and fertilizer requirements. Also pest management. Also in this video are my time-line of the plant growth of how it appeared to be in 2 year duration.
There in this Plant Collection: Colocasia Black Magic, Colocasia Black Ripple, Colocasia Illustris, Colocasia Tea Cup, Alocasia Yucatan Princess, Alocasia Black Stem & Xanthosoma - Blue Taro. 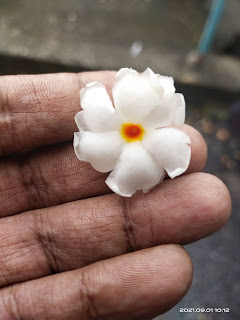 By Definition - it is a bit difficult to determine it's common name as it is very closely named with Night Blooming Jasmine which is totally a different plant. What gives an accurate identification would be a the botanic name which may not be easily identified in common folks like me.
Coral Jasmine commonly also known as Tree of Sorrows and also considered as a Sacred Flowering Plant for the Hindus. According to Hindu mythology - a princess had fallen in love with the Sun God Surya but he had deserted her, broken hearted the princess had committed suicide and was cremated.
This tree grew from her ashes.

There are other legends and mythology concerning this flowering plant based on different cultures and traditions - in most cases, this flower is often associated with piety, devotion and holiness.
Apart from using the blooms for worship - it is also known for using as a dye - the saffron yellow coloration that comes from the flowers and also as a traditional medicinal uses especially the flowers and the leaves to treat many common ailments.

This tree like shrub is native around Southeast Asia and very much cultivated as an ornamental plant around the tropical and subtropical climate, often cultivated in India and surrounding regions where it is used as a sacred plant. 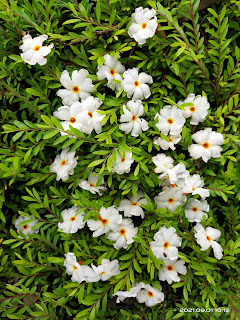 CHARACTERISTICS:
The main characteristics are the blooms having a orange saffron dot in the center. It will bloom at night time, by morning the flowers falls off from the tree or shrub. Devotees often collect the fallen blooms from the ground early in the morning to use for worship.
The fragrance are more evident during the night and may last till morning, my noon the flowers will wither away but the hot sun - the flowers also appear to be succulent like - almost transparent like with a filament of water petals, hence it is very fragile and can easily get damaged.
Personally I had found the fragrance has a slight aroma not to strong or overwhelming when sniffed in the morning. You need to take a sniff close to the flower bloom to get it's fragrance. The smell is almost like what it appears to be like those Giant Incense Sticks used for Hungry Ghost Festival. I doubt any of the floral fragrance were used for personal perfume material. 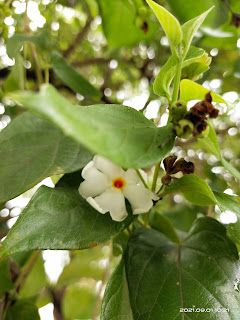 LIGHT:
Being a Tropical plant does require good strong indirect bright sunshine, It can tolerate growing in shaded area however it must receive at least 6 hours of sunshine. It does not do well in heavy shaded area and may not bloom in such conditions. Also the leaves may turn yellow and also become leggy. Another factor in the lack of sunlight may cause the plant to become stress and can attract pest to heavily attack on them.
Hence do give a thought if your are not having open garden area as this would not so well as indoor plant - even placing them as a balcony potted plant can be challenging if they receive inadequate light. 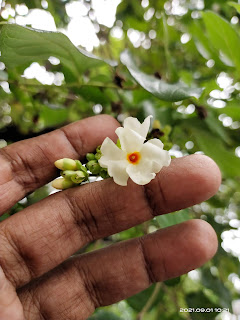 Considering one of the most basic thing about planting material - this one doesn't require anything special - just any balanced potting mix will do. They seem to do fine in a medium or big potted plant - however they will do great if they are planted directly into the garden soil as these will require just that to produce those lovely blooms.

However if limitation occurs where you can only grow in pot - then a good balanced potting mix with rich amount of organic material and equal part of well drained soil which will help from root rot.
Instance as such as these - they are often planted straight into open garden land where they are not in a pot - hence they appear hardy and able to take the heavy pruning. 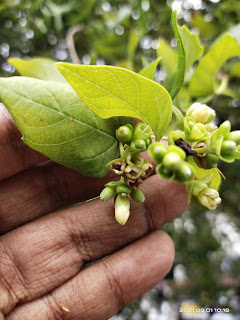 Also this plant is a heavy feeder and do feed adequately during the flowering season.
However take note that over-watering can cause them to bud-drop especially during the rainy season, hence a well balance fast draining medium to ensure no root rot occurs. 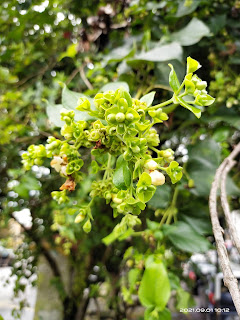 One of the most challenging part for this shrub is pruning. They do grow extremely fast and become very unruly if not proper care is not given - especially when it comes to growth factor, this plant focus more on branching more stem and over growth rather than blooms which can be one of the down-side coming from this ever blooming plant.

However with the right pruning method and keeping it trimmed and manageable size - this one can be such a beauty. This plant can become into a full grown tree - hence pruning and keeping focused in making its growth into one main stem can allow it to bloom more gracefully and not creating a wild-like shrub with stem branching everywhere.
This particular Jasmine blooms constantly on a daily basis. 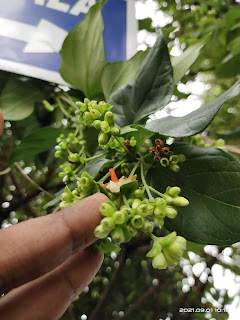 Propagation can be done but stem cutting, stripping off the bottom leaves and poking it into a deep pot with a rich potting soil. Keep it in shade until you notice a new leaves growth.

Another method is to put the cutting into perlite medium (soaked in water)  Once taken roots, it should be carefully transplanted into a good potting mix.. 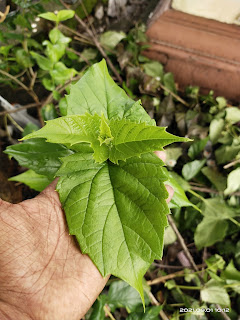 The leaves appear to be on this formation and have a rough sandpaper like texture. 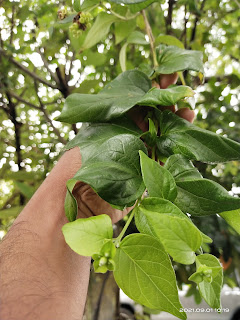 The branching stem appears to be cascading and when it blooms it cascade downwards creating a weeping like structure - almost like what it's known for - a tree of Sorrows. There is no connotation however with any bad taboo or evil connection even though it has a more of a "sorrow' identity attached to it. Rather - it revered as holy and sacred and often used as an offering for worship. 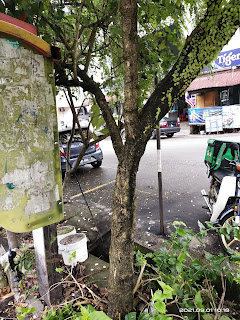 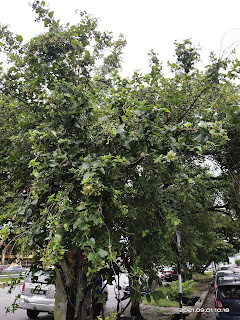 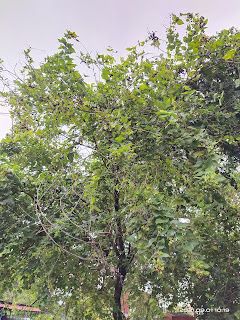 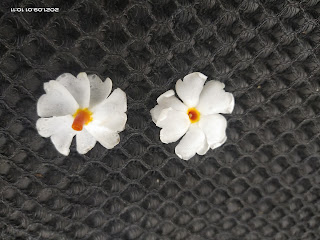 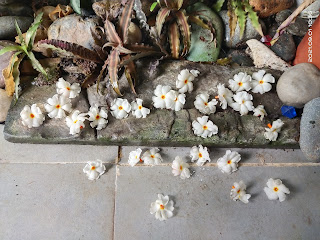 There are few trees and shrubs that grows around my housing area where I had collected these flower blooms to adorn my garden and for the purpose of taking this picture and for my blog entry. I had not grown this particular plant in my garden as they are easily found around my place.

One this for sure - it is truly a beauty to have them grown in a garden if you have an open space for it. 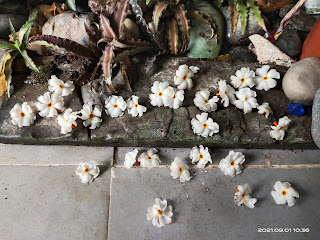