This is my latest garden scene, there are a lot of which I had not updated.
Hope the picture gives a better picture than my words. 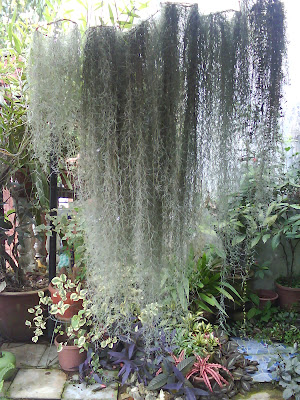 One of my joy and pride of garden plants are these Spanish moss. They seemed to have a life of their own and able to retain and regulate moisture - I guess its the secret of those matured tried moss that is deeply embedded inside the whole cascade effect. I understand that watering is the key factor on this issue. Too much water and they rot, to less water and they dry up.
The best solution is to water once a day and if you really have the time - water on every hour on a hot day - just after the all the residue water had evaporated. You will find the Spanish moss shimmer in silver rainbow.

The scary part often begin just before the rain where the wind is strong. The effect of the wave gives a haunting effect. So I do not recommend if you have a weak heart or that you are feeling that there are unseen residence in your dwelling place. 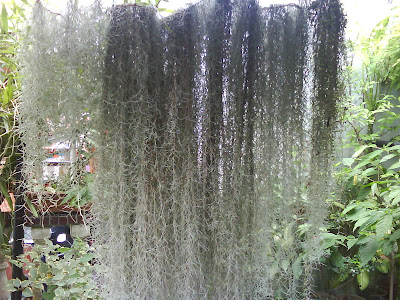 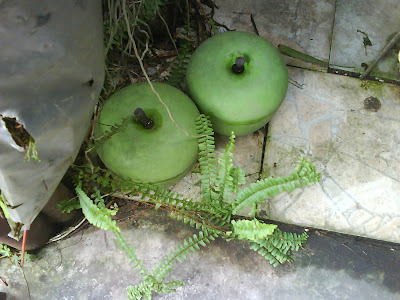 I used to have a water feature in this area but due to dengue menace - I had totally removed all my aquatic plants - what is left is this pathetic apple figures and some trailing ferns which had caught its roots in between the overlay of tiles. I was thinking of uprooting and replanting them in a small pot (which again - requires time and work) but thought that this is unique and therefore remained as such. 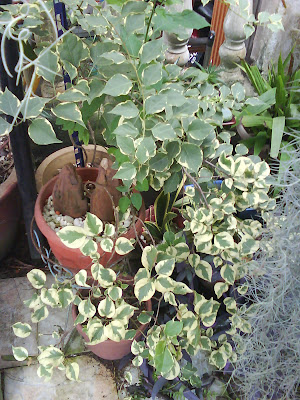 This is my bougainvillea collection -there are 2 pots here, recently it flowered but I really never took the trouble to capture them in camera (it rained often and that spoilt my mood in gardening) And by the time my mood finally arrived -they flowers had fallen.

So I guess - I had became a careless gardener - got satisfied with the variegated leaves than those flowers. The thing is - bougainvilleas blooms successfully when they are in the open, and so the chances here are slim (and worst are when the orchids are now creating a screen over them) 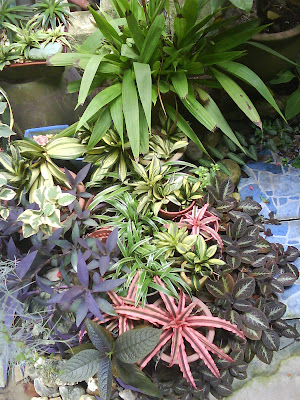 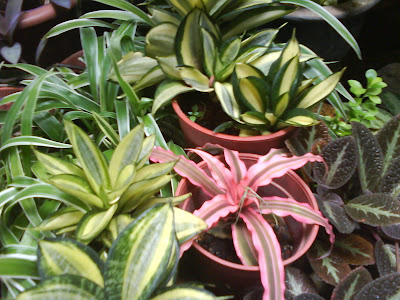 I'm still marvelled at these collection, they are still going strong with less care. Perhaps I will focus on my next project in getting more variegated coloured earthstars and bromeliad -they seemed to be more receptive and hardy (the only thing is their price factor and their rare occurrence in nursery and garden centres) Hope I will be able to get more of this when my finance is good. 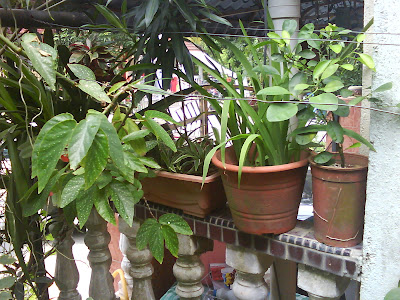 This appears to be "ugly" compared to what you see in real life. I guess there is another work to be done here and I really have not thought what would go well here. Earlier I had placed the ground orchids here but they tend to get burned up often and I had placed just below this place and it is doing fine so far now. 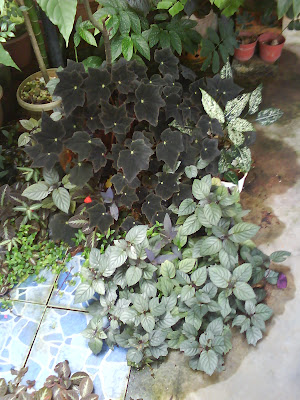 This is my another surprise of surprises:

Garden plants where you don't need soil to flourish.

They just grow lavishly along the concrete surface, in between the pebbles and stones. 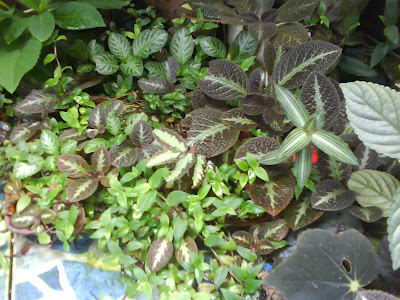 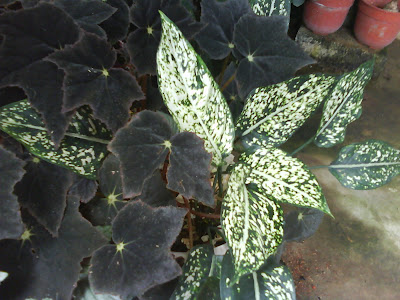 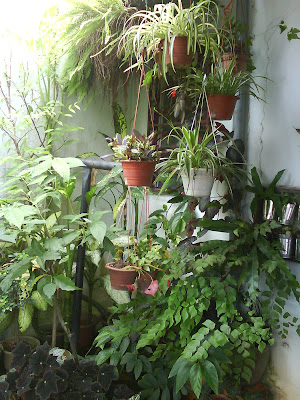 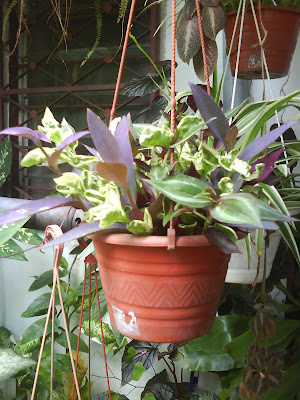 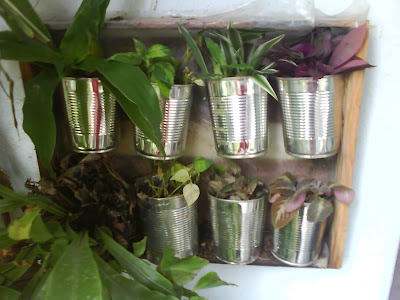 My first vertical landscape garden didn't go well. I guess the problem was when I placed the soil medium sideways - the watering became bad. And so, the only thing that looked healthy was the bird nest fern, and so I thought of placing these milk can containers (sort of recycle garden idea)

and they seemed to do fine after these 2 weeks. 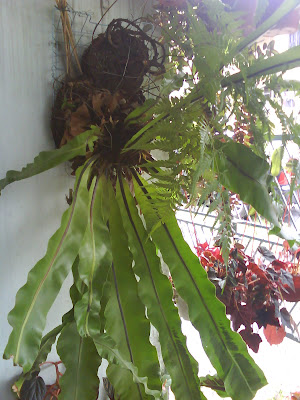 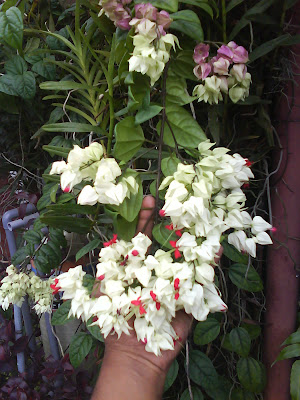 The other factor about floral is the bleeding hearts. It is never a regret to have them in the garden, they bloom constantly and add more florets with lasting blooms. Somehow they compensate the flowerless orchids which I still tolerate believing that they will bloom someday by sheer luck or sort. I still haven't got drastic enough to get rid of them. 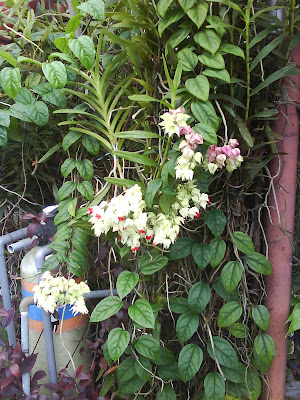 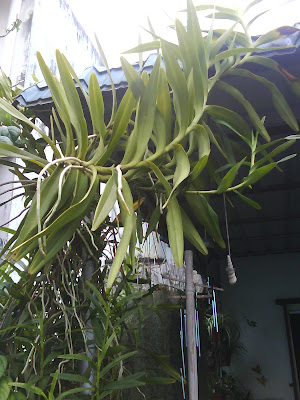 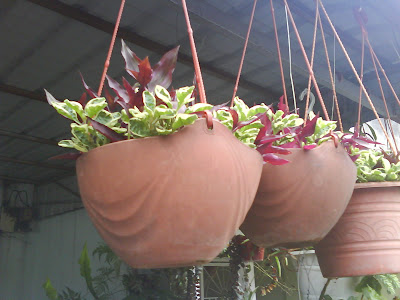 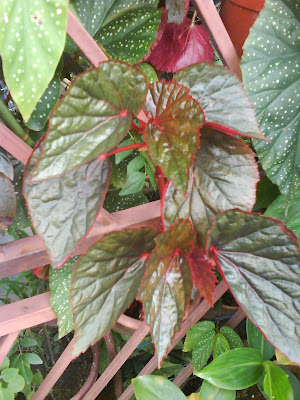 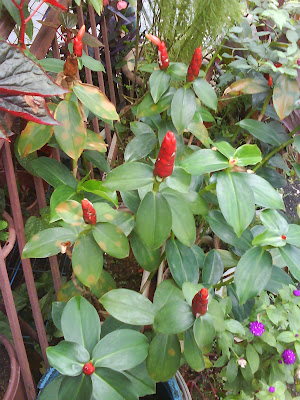 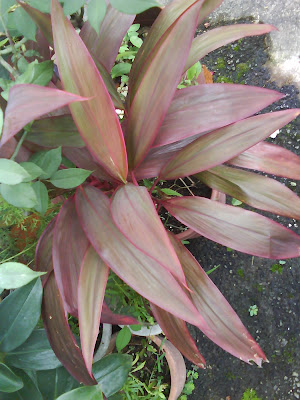 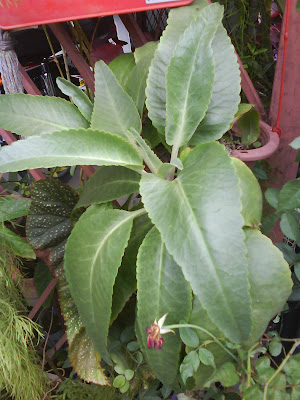 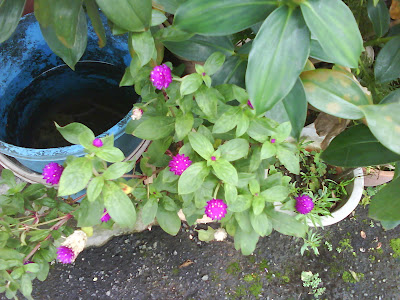 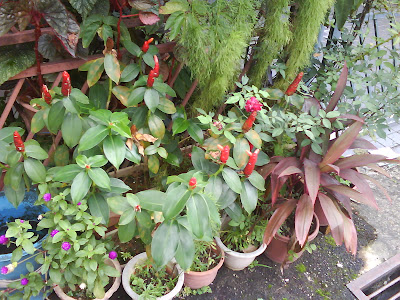 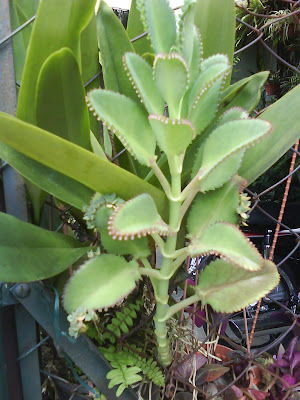 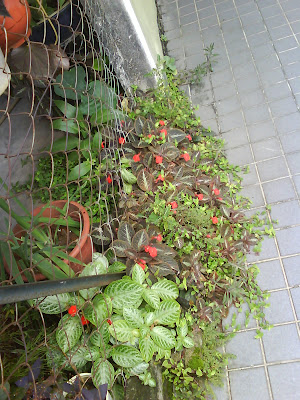 You won't believe it when you this: That my garden plants had migrated to my neighbour's space and they are blooming furiously - these flame violets seemed to do so well on the ground compared to hanging pots. It all started when few of these had fallen from my previous hanging pots and they took their humble residence for quite awhile. Not they seemed to take more than a foothold. Its all up to my neighbour now whether they would like to keep them or rid of them.

I would consider their silence as their approval - or it would have been a "rid-tear-throw" effect.

But if this happens to me, where my neighbour's plants coming to my garden - I would consider those blooms as luck and that I'm graced with beauty and abundance.

Well, so far. My garden is not that boring after all. 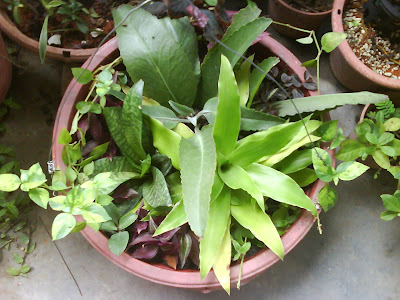