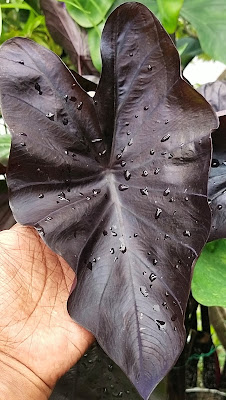 CHARACTERISTICS:
This particular Colocasia have very strong similarities like Black Ripple Colocasia however the leaves do not have any ripple effect on them. Also this particular one have a strong glossy effect similar like Black Ripple - almost with metallic sheen however not very evidently visually strong like the Electric Blue Gecko.
There have been a lot of discussion and confusion added in actually identifying the true Electric Blue Gecko. Based on my opinion, this particular one was initially sold as "Black Coral" and eventually re-labelled as EBG for a stronger visible coloration on this particular variant.
I had also seen where confusion is added when Black Ripple Plant is also labelled as Electric Blue Gecko - As for me, I know that I don't own one (EBG) as I know the coloration are very strong and visible - especially the blue tones.
Other than that, the Care and Cultivation of this particular Colocasia is very much the same. Click below for more detailed information concerning this matter.