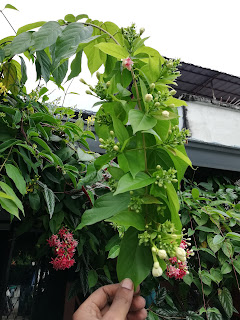 Combretum indicum / Quisqualis indica is commonly known as Rangoon Creeper Vine is a tropical vining plant that is native to Asia from surrounding regions of India to South East Asia and also found in the tropical regions of Africa.

It is cultivated mostly for ornamental purpose however in some countries these are often used as Traditional medicinal usage based on their own unique cultural heritage.

There are few varieties concerning the floral display; Here - I'm showcasing the multi-petaled type which comes in 3 colors which turns from white flower bud followed by pink and deep red when matured. There are another variety where it is single petaled type - either comes in 3 colors or only in red, however I had also come across the non-fragrant type too. 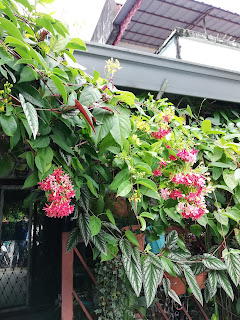 This vining plant requires direct hot sun to bloom, it may able to tolerate half day sun but it will not bloom in full shaded area. This plant can grow wild and leggy and therefore may require pruning time to time to keep it in proper shape. It may form very well on a pergola or a canopy as it loves to grow high first and cascade before it flowers.

One of the most important factor is Lighting. Failing on this part will be a considerable part where this one will rarely gives out flower buds or in most cases just one or two flower buds. Hence do take it in the highest priority that it does get full direct sun throughout or at least it is placed where there is open sunlight for it to receive at least for half a day. 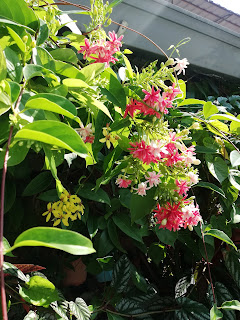 Considering one of the most basic thing about planting material - this one doesn't require anything special - just any balanced potting mix will do. They seem to do fine in a medium or big potted plant - however they will do great if they are planted directly into the garden soil as these will require just that to create those majestic cascading blooms.

However if limitation occurs where you can only grow in pot - then a good balanced potting mix with rich amount of organic material and equal part of well drained soil which will help from root rot.

Locally here in Malaysia, this plant is known as "Akar Dani" denoting the emphasis on the roots of the plant - Dani Roots. 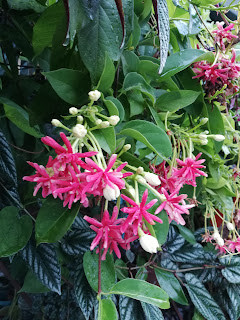 Also this plant is a heavy feeder and do feed adequately during the flowering season. 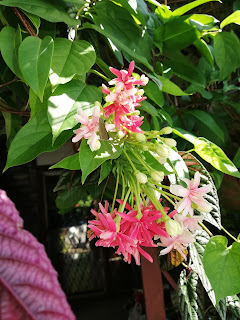 Propagation can be done but stem cutting, stripping off the bottom leaves and poking it into a deep pot with a rich potting soil. Keep it in shade until you notice a new leaves growth.

Another method is to put the cutting into perlite medium (soaked in water)
Once taken roots, it should be carefully transplanted into a good potting mix.
Another option is to look out for a sucker that appears from the root base.
This happens if the plant is very established and has a huge root system.
Also I had noticed that this particular one can be very challenging to propagate if done wrongly - these are difficult to roots easily. 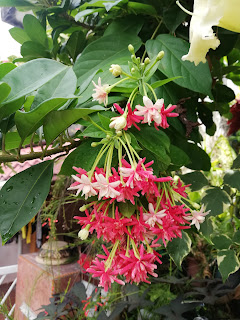 One of the most challenging part about this vine is pruning. They do grow extremely fast and become very unruly if not proper care is not given - especially when it comes to growth factor, this plant focus more on branching more vines and over growth rather than blooms which can be one of the down-side coming from this ever blooming plant.

However with the right pruning method and keeping it trimmed and manageable size - this one can be such a beauty. As shown here - the appearance of the blooms can last at least for few months until the next pruning session is done to maintain the blooming cycle from interruption.

This consideration applies very accurately when the plant is matured and had grown for years - that is if it is not flowering in its full potential. Other factors involving lighting / watering / feeding is also essential and necessary. 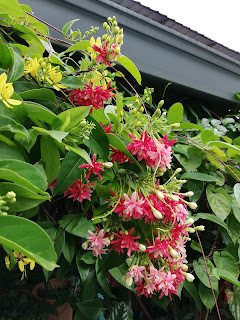 Rangoon Creeper is very much a celebrated flowering plant due to the showy bunches of inflorescences that forms constantly which often used for adorning flower gardens and also used for worship. These are indeed very captivating especially the fragrance - very much like jasmine: this one emits the fragrance during evening time.

The fragrance is not overwhelming and doesn't not create any distress rather very much calming and refreshing especially if you have this one placed somewhere around a sitting place like a pergola or picnic area - the fragrance often gives that refreshing feeling especially where memory can serve as a happy moment.

It almost have a mix fragrance similar with Ylang-ylang, Night Blooming Jasmine together with Buddha Jasmine - however the distinct fragrance note - does however embedded in memories especially if you have childhood memories - this one stays for a lifetime.

I had taken noticed that this ornamental plant - Rangoon Creeper Vine known locally as Madhumalti plant is very much cultivated in gardens in India where it is grown even on roof tops and cultivated for it's blooms and even for the folk-medicinal uses.

Also there are many other regions around the world where this plant is cultivated and parts of the plant are also used as traditional medicine from many parts of the world as these are endemic throughout India,  Australia, Africa and parts of tropical regions of Southeast Asia and Australia. namely Philippines, Bangladesh, Myanmar and Malaysia and now also broadly grown in India as
ornamental plant in most of the garden.
OTHER USES:

The plant is also cultivated for stingless bee - honey cultivation.
These bees seems to be attracted to the nectar. However, a collection of other floral plants will also make a good variety as this particular plant is nocturnal.

Another factor is the fruit appears to be elliptical with wings is also cultivated in some part of the world as medicinal uses - described taste very much like almonds however I had seen any forming fruit in my part of the region which occurs to be me that they may require some cold temperate climate for them to form fruit. 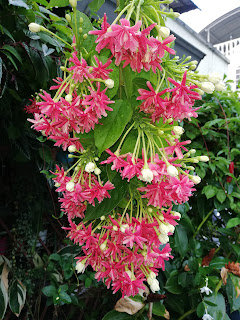 PEST CONTROL:
I had found that Rangoon Creeper Vine seemed to be a very resilient plant without strong resistant to pest attack in comparison to many other floral plant - however I had occasionally come across that caterpillars to feed on them and often if the plant is anyway stressed or lacking nutrients may face some damage on it's foliage but rarely fatal to the plant.
Keeping the plant - Pruned and Compact does make the plant focused on its blooming cycle and also able to take immediate action if any unruly pest attack where pruning is much easily handled rather than spraying pesticide all over the plant.
Also I had noticed that spider mites can easily infect the leaves when the plant is over-stressed.
Apart from this factor, other matters are very much similar with most tropical garden plants. 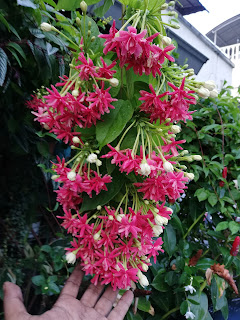 BLOOM PROGRESSION FROM BUD TO BLOOM:

Often these flowers change colors from the bud to bloom, where in this case - the buds are in full white and slowly turn pink in mid bloom and fully turn red in full bloom and become dark crimson before the flowers fall off. These coloration are remarkable in their red full bloom displays with their mesmerizing fragrance in evening time. 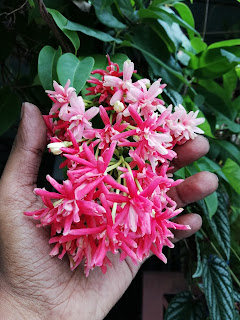